A brief look at student summer retreat in Vietnam

Unlike other provinces of the society of Jesus, both in the assistancy and in the world, Vietnam province has no high schools, universities or colleges. Vietnamese Jesuits have thus chosen to take a “subway” to educate young Catholic students: providing at church based environments classes of catechism, Ignatian spirituality, leadership and academic stuff. And we call the above “pastoral ministry of/for students.” Thus, our mission statement for the pastoral ministry of students goes: as an apostolate of the province, our ministry given to students must be deeply rooted in and widely apply the Ignatian spirituality to better serve (magis) the training of Vietnamese young Catholic students so that they can obtain certain maturity of Christian way of living, of knowledge, and of faith. In order to put into effect, the above mentioned purpose driven mission, particularly the spiritual dimension of students’ life, every year we organize summer retreats for students those who can make time to attend.

What is student summer retreat in Vietnam? A student retreat is organized at a tranquil place during July and August, given to young people aged from 17 to 30, and guided by a Jesuit as leader, and some well-trained-in-Ignatian-spirituality collaborators, mostly nuns from different congregations. It includes 5 days of silent prayer, plus one-day picnic. The picnic day is very important since it is the day for retreatants to get known one another better via spiritual talkings, game-playing, etc.

Student retreats are done thanks to financial support from benefactors in and out of the country, normally with a half of financial contribution coming from retreatants themselves. History of student summer retreats Giving students’ summer retreats dates back to the 1990s. It was initially undertaken by Fr. Liem Pham S.J, now the provincial of Vietnam province, exactly in 1992.  At the beginning, this kind of summer retreats given to students was our work carried out at the students’ own invitation and given only to a small number of students who wished to attend. After two years of experiment, student summer retreats further developed in 1995 regarding the number of retreatants attended and courses organized in the south of Vietnam. They were also set up in a more organized way: several student groups living and studying in the same area worked together and organized one a retreat for those who wished to participate in it. Student summer retreats were the environment where Christian Life Communities was born. In 2005, student summer retreats were brought to the center and the north of Vietnam. The first times student retreats held in the north attracted a great number of students attended. For example, there were nearly 300 students attended in the retreat held at Saint Joseph Major Seminary, Hanoi. For the time being, we have students’ summer retreats through out the country. The courses of retreat increase every year. There were 11 courses in 2013, with 788 students attended. The figure of retreatants increased to 1,055 taking part in 13 courses in 2014. 19 courses have been done this year, with 1,167 students participated. Not all students can make their time to attend retreats during summer, we thus plan to organize more retreats during the year. 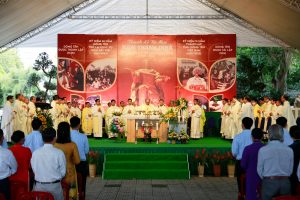 Highlights: Mass on the solemnity of St. Ignatius and the closing of the Ignatian Year