Jesuit Student Ministry in the Diocese of Vinh

Share on facebook
Share on email
Share on twitter
Share on print
Aug 3 (Viejesuits) – This year, Vietnamese Jesuits are marking seven years of service for Catholic students in the Diocese of Vinh which covered northern central provinces of Nghe An, Ha Tinh, and Quang Binh (After being split to establish the Diocese of Ha Tinh in 2018, the Diocese of Vinh currently covers Nghe An Province only). The Association is guided by a diocesan priest officially assigned by the bishop of Vinh and accompanied by Jesuit regents. Every two years, some students are selected from groups to form a committee of 6-10 who are responsible for carrying out common activities, representing the Association, looking after annual programs of the Association.

In collaboration with the Diocese, the Jesuit Student Ministry provides opportunities for students to listen for and live out their callings from God, help them nurture and celebrate their faith, and prepare them for leadership roles in the Church and society. Through liturgy and worship, spiritual formation, monthly recollections, retreats, and service to others, especially to the poor, the students are formed by the Ignatian charism of doing all things for the greater glory of God and being men and women for God and for others.

Every evening from Tuesday to Thursday, Jesuit regents visit groups gathering at some churches or households in Vinh city, to accompany them in various activities, such as faith sharing, Ignatian Examen, team-building programs, etc.

Besides weekly programs, other activities such as Advent and Lenten recollections, leadership training programs, exposure programs, and volunteer community service are organized to help students experience the world around them and be inspired to engage in the mission of the Church.

Although there are no Jesuit-run schools in Vietnam, Vietnamese Jesuits can have a good effect on Catholic students through the so-called “pastoral ministry for students.” This ministry exits to accompany students in their journeys of faith, to help them integrate their knowledge and love of God with their lives of service to others, and to help them discern their vocations. 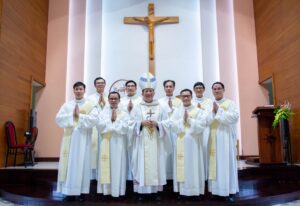 In everything, love and serve the Lord: Eight Vietnamese Jesuits ordained deacons