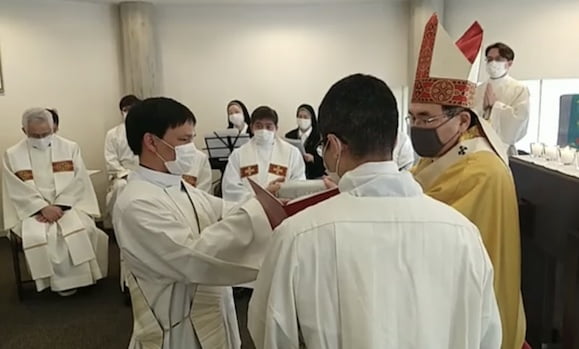 One Vietnamese Jesuit ordained to the Diaconate in Japan

Rev. Peter Nguyen Van Toan, SJ, a Vietnamese missionary in Japan, was ordained to the diaconate by the Most Rev. Tarcisio Isao Kikuchi, S.V.D, Archbishop of Tokyo, in the Theologate of the Japanese Province on March 6, 2021.

Toan, 39, was born in Ha Nam province, North Vietnam. He entered the Sacred Heart Novitiate in Thu Duc in 2008 and took first vows in 2010. After finishing his three-year philosophy at St. Joseph Jesuit Scholasticate, he was sent to Japan for studying Japanese and doing his regency. After his regency, he studied theology at Sophia University. Deacon Toan is finishing his Licentiate in Sacred Theology at Sophia University in Tokyo.