Father Nico in the memories and hearts of Vietnamese Jesuits

Jesuits worldwide mourn the death of Fr. Adolfo Nicolás, SJ, a Spanish Jesuit and former Superior General of the Society of Jesus between 2008 and 2016, who died on Wednesday, 20 May 2020 in Tokyo, Japan. Father Nicolás, affectionately called “Nico” by the Jesuits of Asia Pacific, is remembered by many not only for his leadership as a Jesuit leader but also for his humility, wisdom, holiness, and sense of humor and approachability.

Born and grown up in Spain, Fr. Nicolás dedicated almost his whole life to work for missions of the Society of Jesus in Asia, especially in Japan and the Philippines. Indeed, in his election result announcement during the 35th General Congregation, Fr. Fernando Franco, SJ, described the newly elected Superior General of the Society of Jesus as follows:

“We have left the election hall a few minutes ago. I am glad to announce that we have a new Superior General of the Society of Jesus. There is immense joy as the members of the Congregation approach the new General to greet and embrace him. Adolfo Nicolas SJ is a man from Asia, a theologian from Japan, but born in Palencia Spain in 1936. He represents a new generation of Spanish missionaries in Japan after Fr. Arrupe.”

Fr. Thomas Vu Quang Trung,  SJ, former Regional Superior (2003-2007) and former Provincial Superior (2007-2010) of the Vietnamese Jesuits, who had worked with Fr. Nicolás for eight years (19 March 2003-05 November 2010), shared his first impression of Fr. Nicolás: “He is a gentle, cheerful, open, and approachable Jesuit who is always ready to listen and help his fellow Jesuits. He is also a spiritual man who is deeply united with God at every moment of his life.”

As the President of JCEAO, Fr. Nicolás loved and cared for the Jesuits in Vietnam. Fr. Trung recalled, “He loved the Vietnamese Jesuits very much. During my first years of being in charge of the Vietnam region, he accompanied me, especially when I was faced with difficulties and challenges. He gently guided me, advised me, and accompanied me as a senior brother taking care of his little brother. At that time, when the region faced financial difficulties, Fr. Nicolás guided me on how to find financial support for building necessary facilities for the region as well as for the formation of scholastics. Therefore, the development of the Province today somehow is due to the contribution of Fr. Nicolás.”

The former Provincial shared three unforgettable moments with Fr. Nicolás when he participated in the 35th General Congregation in Rome, “First, during two-month General Congregation in Rome, every morning, I usually met him while walking from Roberto Bellarmino community to the Aula at the Curia. Then, we walked together and talked about the situation of the Society and discussed topics at the GC 35. For me, these moments were spiritually deep consolations between friends in the Lord. Second, when he was elected as Superior General of the Society of Jesus, filled with joy, delegates of the Jesuit Conference of Asia Pacific called his name out loud: “Nico! Nico! On the evening of that day, Jesuits of JCAP went out for dinner with Fr. Nicolás to celebrate his new mission. Third, I sat in the first row in the Aula. Whenever he came to his chairman table, he greeted me in Vietnamese with a smiling face: “Chao cha! (Hello, Father! I also gently said in reply: “Vang, con kinh chao Cha a!” (Yes, your very reverend!)

According to Fr. Joseph Pham Thanh Liem, SJ, former Provincial between 2010-2016, the most impressive characteristic of Fr. Nicolás is his smile: “He was amiable and usually smiled gently. This characteristic reflected his intimate relationship with God that helped him to be more approachable to everyone.” Fr. Liem also added that during his visit to the Vietnamese Province in 2015 he was very happy when he learned that the Province had many vocations. He also shared his concerns and expectations in offering a deep formation to young Jesuits in formation, especially regarding Ignatian Spirituality. Fr. Liem recalled, “When I reported to him the Province’s Apostolic Preferences, such as giving the Spiritual Exercises, engaging in intellectual apostolate, social apostolate, evangelization, and other apostolates like pastoral works at parishes, student and worker ministry, and communications. He was listening attentively. And as usual, he reminded us of the depth of spiritual life. Particularly, he urged the Province to send Jesuits to study about Ignatian Spirituality. The Province has already taken his advice in sending its members to study abroad. The Vietnamese Jesuits are following Fr. Nicolás’ instructions.”

Fr. Vincent Pham Van Mam, SJ, current Provincial of the Province, who used to study at the East Asian Pastoral Institute (EAPI) in Manila, Philippines and met Fr. Nicolás several times, also shared the same impression on the cheerfulness and peace of Fr. Nicolás, “His gentle smile, joy, and peace are fruits of a radical abnegation for the sake of the Gospel as well as the result of an untired finding and exploring a transcendent reality in spiritual depth and stability.” In his homily at the Memorial Mass for Fr. Nicolás celebrated at the St. Joseph Jesuit Scholasticate’s chapel, Fr. Mam praised Fr. Nicolás as “an excellent leader who had the integration of faith, joy, wisdom, and internal freedom,” as well as “his untiring efforts in urging and promoting all Jesuits to pursue deep values of the Gospel and Ignatian Spirituality that we learned through his sharing and exhortations.”

Fr. Joseph Pham Tuan Nghia, SJ, Rector of St. Joseph Jesuit Scholasticate, who met Fr. Nicolás several times when he was a theological student in Rome, shared three great lessons that he has learned from the life and mission of Fr. Nicolás: Think widely, think deeply, and universality of the Society of Jesus. Fr. Tuan Nghia recalled: “Fr. Nicolás used to humorously remind scholastics that: ‘Study hard so that you can be qualified to be a future superior general. When the Society needs you, you are always available.’ I think that he didn’t mean to produce arrogant Jesuits or those who ambitiously seek high positions within the Church. What he meant was: Do not use fake humility to justify laziness; do not be satisfied with whatever you have obtained. You need to pursue the width of Magis.”

As Superior General, Fr. Nicolás always insisted on spiritual depth in various talks and exhortations, especially to young Jesuits. “He usually reminded the Jesuits of this point. I think this is a unique characteristic of the Jesuits. It would be a great danger if a Jesuit was just satisfied with his superficial knowledge or immediately believed what he had heard without thinking and examining carefully, or who hurriedly wanted to be a teacher before becoming a student. At this point, Fr. Nicolás taught me the depth of the Magis of St. Ignatius,” said Fr. Tuan Nghia. As President of the JCEAO (2004-2008) and Superior General (2008-2016), Fr. Nicolás visited many provinces, regions, and missions of the Society of Jesus around the world. He often insisted on the universality of the Society of Jesus. Fr. Tuan Nghia added, “Fr. Nicolás said, ‘Becoming Jesuits means to be incorporated into the universal body of the Society, to put aside exclusive localization in language and culture to serve the common good of the Society and the Church. This is also another beautiful characteristic of the Jesuits.”

Fr. Peter Truong Van Phuc, SJ, who was sent to accomplish his international mission in East Timor by Fr. Nicolás as well as one who pronounced his final vows with him when he visited the Vietnam Province in 2015, affectingly posted his feeling on his Facebook after hearing of the passing of Fr. Nicolás, “I always remember your friendly image as a wise and humble General who was filled with peace and hope, cared for the poor with compassionate love, welcomed your fellow Jesuits with a gently smiling face. I was so blessed to be guided by you during my journey of accomplishing my mission.”

Sch. Bartholomew Nguyen Anh Huy, SJ, a theological student in Rome, shared his feeling after learning of the passing of Fr. Nicolás as follows: “Dear Father, I still remember my first encounter with you when you visited the Vietnamese Province. I sang Yo vengo a ofrecer mi Corazon to welcome you. At the end of the gathering, amazingly, you approached to thank me, a first-year scholastic for singing the song. ‘Do you know Spanish?’ ‘No, Father, I just imitate the lyrics. Did I incorrectly pronounce while singing? ‘No worries, I understand all because you were singing from your heart.’ Then you placed your hand on my shoulder to encourage me with a gentle and warm smiling face. Dear Father, may God be present in your heart, and you are also in the heart of God.”

Fr. Nicolás now rests in peace in the house of God. However, his precious words and beautiful memories remain in the hearts and minds of many Vietnamese Jesuits. The life and mission of Jesuit Nicolás will never end, his life and mission will continually be “a living message for his fellow Jesuits” according to the saying of Fr. Provincial during the memorial Mass for Fr. Nicolás. Let’s use the prayer written by Fr. Nicolás to be a conclusion of these above stories about him.

Lord Jesus,
What weaknesses did you see in us that made
you decide to call us, in spite of everything, to collaborate in your mission?
We give you thanks for having called us, and
we beg you not to forget your promise to be with us to the end of time.
Frequently we are invaded by the feeling of
having worked all night in vain, forgetting, perhaps, that you are with us.
We ask that you make yourself present in our
lives and in our work, today, tomorrow, and in the future yet to come.
Fill with your love these lives of ours,
which we put at your service.
Take from our hearts the egoism of thinking
about what is “ours,” what is “mine”, always excluding, lacking compassion and
joy.
Enlighten our minds and our hearts, and do
not forget to make us smile when things do not go as we wished.
At the end of the day, of each one of our
days, make us feel more united with you and better able to perceive and
discover around us greater joy and greater hope.
We ask all this from our reality. We are weak
and sinful men, but we are your friends.
Amen. Summer Program for Scholastics during COVID-19 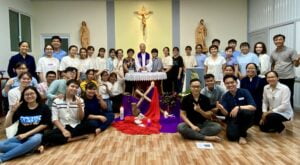 Jesuit Student Ministry of the Vietnamese Province in Can Tho city, Southern Vietnam’s Mekong Delta Region